If you are short on time, don’t let that stop you from exploring what Tokyo has to offer. Here’s how I made due with my limited time in the Japanese city.

I first had to research the different areas of Tokyo to see exactly where I wanted to visit. I needed to be in  a location that was central to the most attractions. I knew for a fact that I wanted to see Harajuku and Shibuya crossing. I typed in both areas on search engines to find accommodations. I came across a pod hotel in the heart of Shibuya. At the time, the hotel had not opened so I was hesitant not having reviews to read first. I knew that staying in a pod or capsule hotel was something that was on my Tokyo bucket list, so I went with my gut and booked.

I then had to research my transportation options into Tokyo since I would be arriving on a really late/early  morning flight. At this time, all trains would have stopped. I found info on an airport bus company (Keiyu Bus Co.) that had a bus into Shibuya during late night hours. The bus was around $16 compared to taking a taxi at that time for around $80. I had a few friends in Japan call for me to inquire as well. Although I wasn’t able to reserve a seat in advance, I still decided to wait and try my luck.

Everything went smooth and I made it to the hotel. When I walked into The Milleanials Shibuya, I was blown away. It was brand spanking new and the location was perfect. Upon check in, I was given my own iPod touch that would serve as the control for my pod and the building elevators. Once I arrived at my pod, a really nice souvenir toiletry bag was waiting for me with towels, slippers, a toothbrush, cotton pads, and ear plugs. 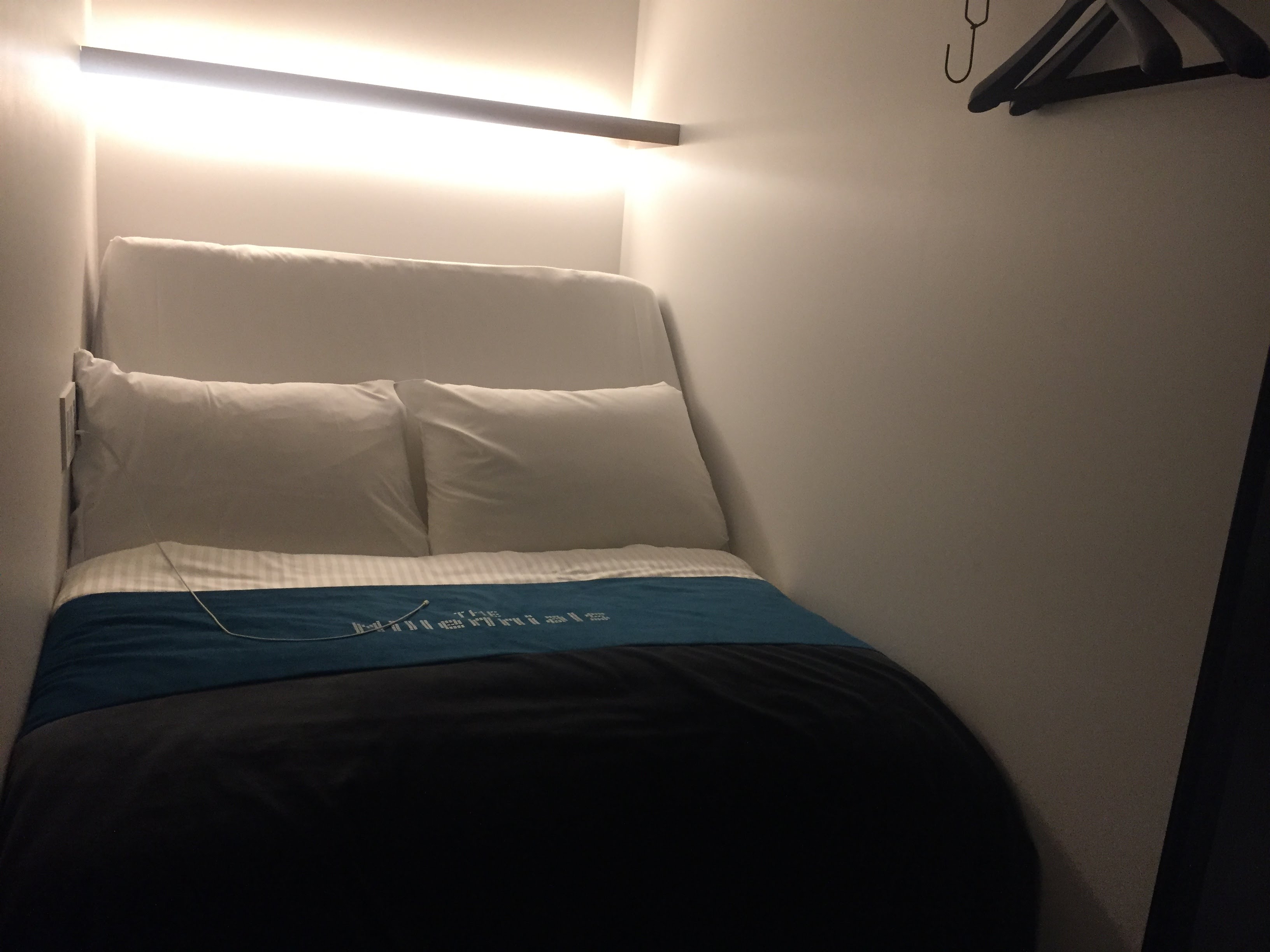 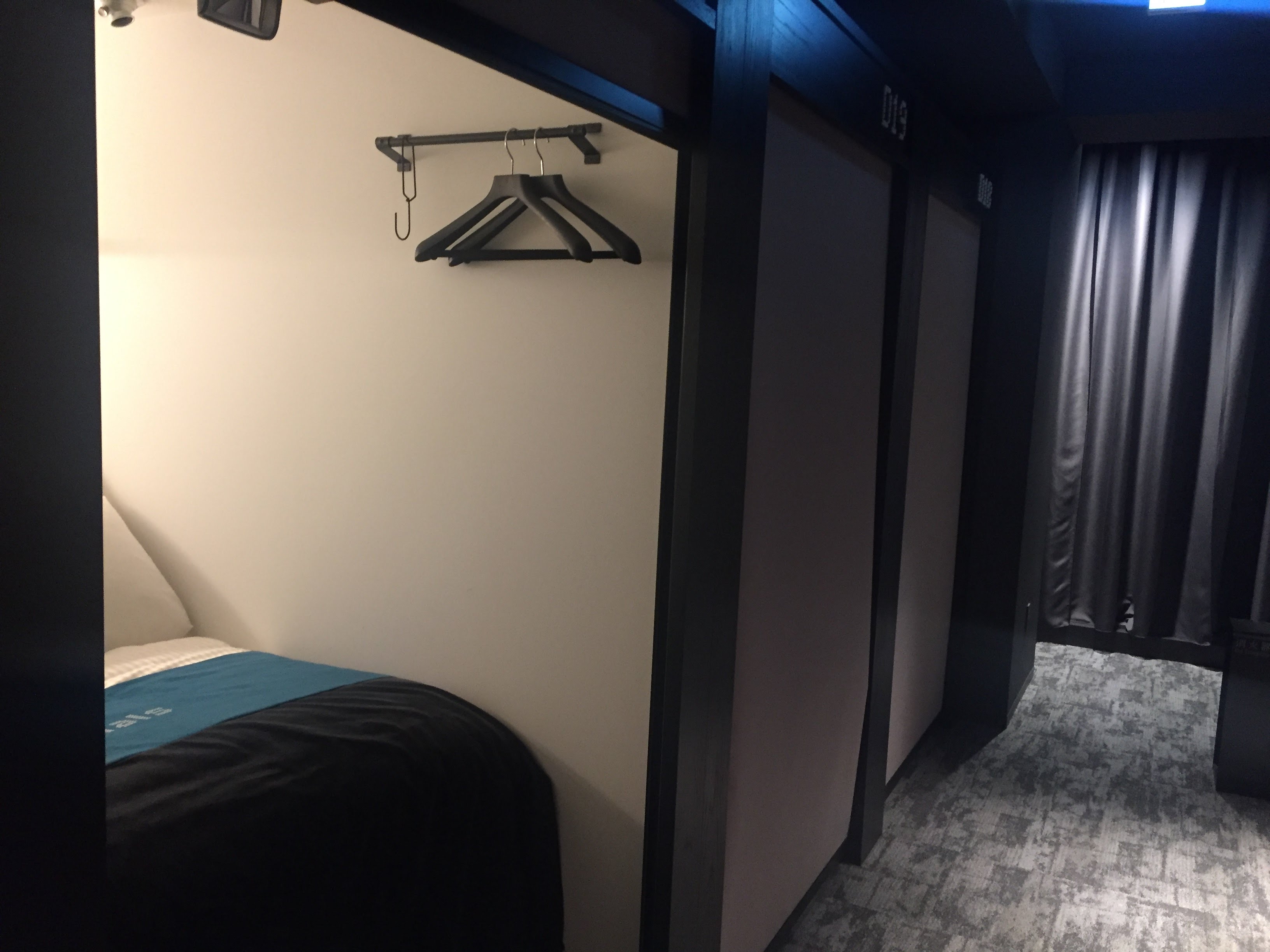 I set my alarm using the iPod touch. You also control your bed position, the lights in the pod, and the theater system with it. After playing around with all of the functions, I finally decided to head to bed. (I was too excited.)

I opted for late check out since I arrived so late. I wanted to give myself a little more time to sleep and then prepare for a non stop day, afterall I literally only had one day.

I checked out of my pod and stored my bag with the hotel and set out. I asked the front desk attendant for a pancake restaurant recommendation. To my surprise, there was one just steps away.

I arrived right when they opened at 11am so I didn’t have a wait. I ordered the strawberry banana pancakes with orange juice. I had missed homemade pancakes since Western style pancakes are hard to find in Korea. The breakfast total was around $14.

After breakfast, I set out to see the infamous Shibuya crossing. Shibuya crossing is known as the world’s busiest intersection. It was amazing to see all of the people crossing from 3 different ways. I wandered around Shibuya for a bit and stumbled upon another famous site, Hachiko statue. Hachiko was a dog that would come to Shibuya train station to greet his owner after work every day. The dog even continued this after his owner died for several years. ( Now that’s loyalty) A statue was erected in the dog’s honor. 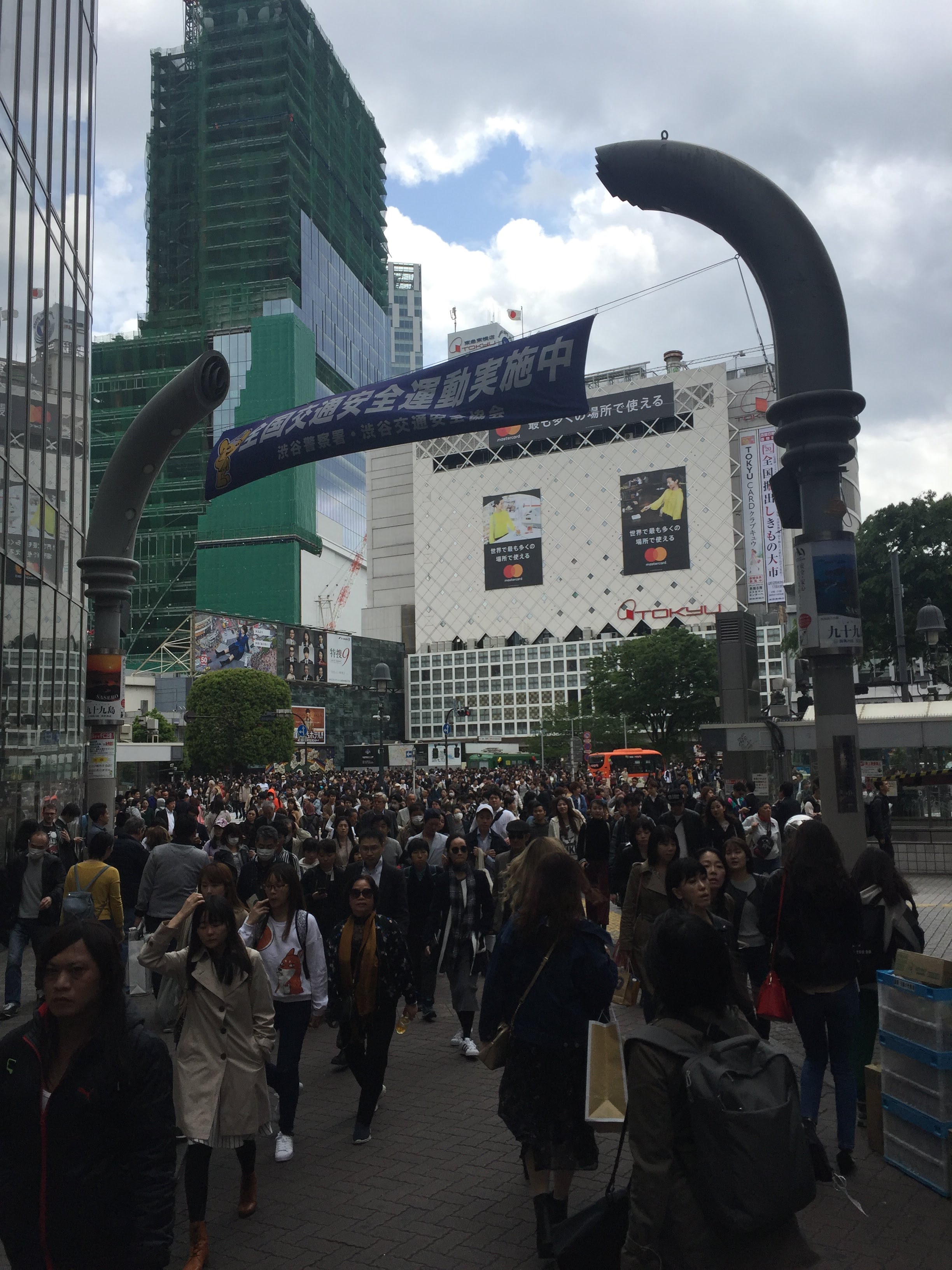 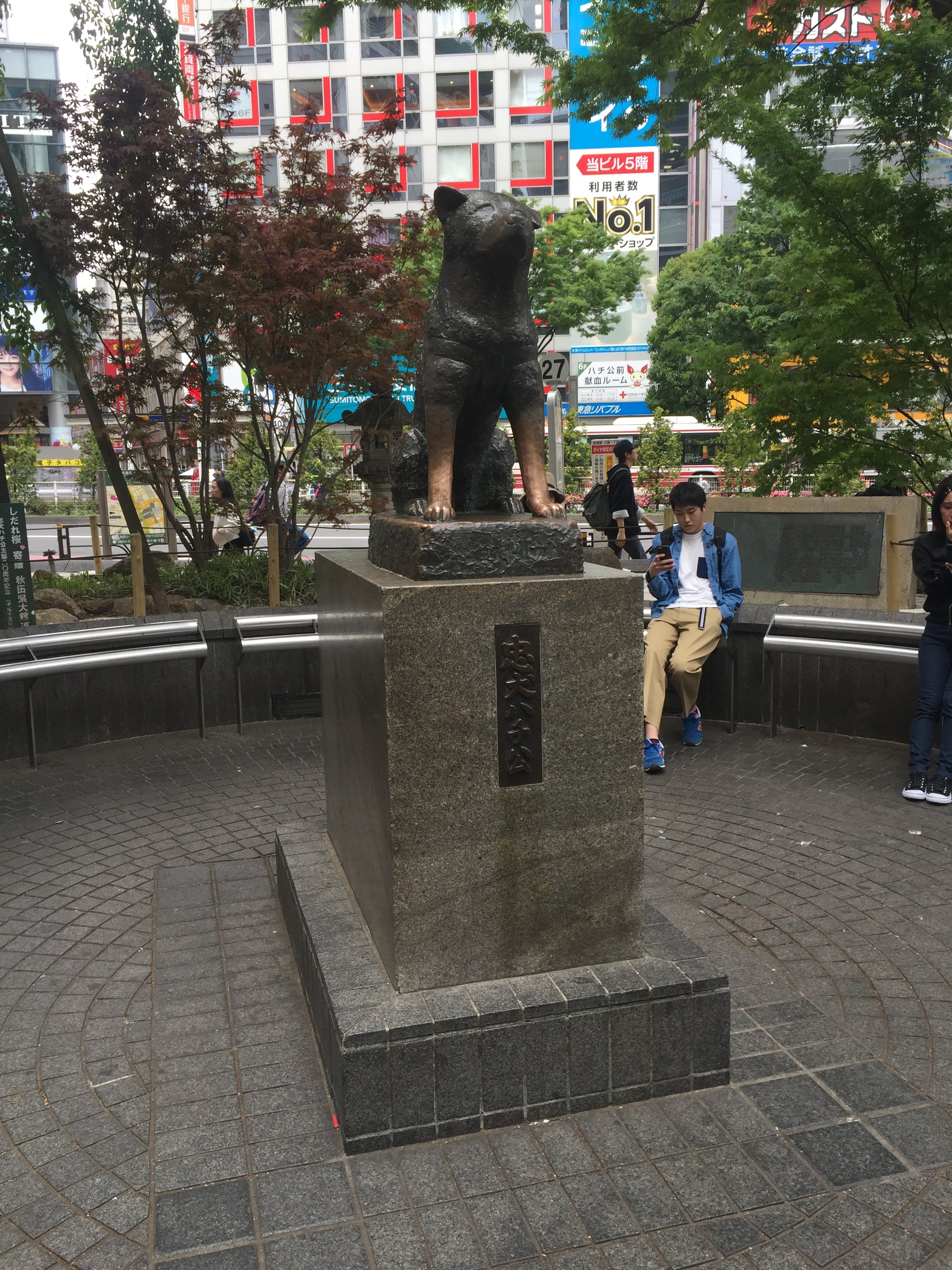 After watching the chaos of the crossing a few more times, I set out toward Harajuku. Luckily it was also in walking distance (about 15 minutes) Harajuku is the area that I picture when I think of Tokyo. Here you find all of the girls and guys dressed in Kawaii costumes as well as stores that sell the clothes as well. Harajuku is also home to lots of retail stores and cool restaurants. In the heart of Harajuku is a really cool escalator with a kaleidoscope like mirror.

The only thing I was in search of while in Tokyo was sneakers. Korea doesn’t always get the best selection and if they do, they tend to charge more. Let’s just say Tokyo is a sneaker lovers dream. I browsed in several stores, going down different streets just to see what was out there. I wanted to think my decision through carefully so I waited to purchase until I was able to truly compare the options.

That afternoon, I had reservations at the Kawaii Monster Cafe. I have been eyeing this place since I came to Korea. Kawaii Monster cafe is a restaurant that, as one person describes, is a child’s dream on acid. You are escorted into the doors and you instantly say WOW!!! The colors! The lights! The crazy merry-go-round in the very middle! It’s a sensory overload. I didn’t know which way to look first. Since I was alone, I was able to get a small table that was literally in the middle of all the action. (SWEET!) At this restaurant, you can either pay for the $5 admission in advance online (which I did) or pay in person. (Just be mindful you will have to wait until people with reservations are seated first if you pay in person) Once you enter you must then purchase one food and one drink item from the menu. There are also pre paid menu packages you can opt for. I ordered fries and a coke. (cheapest things on the menu) The fries came with an assortment of colored dips to mimic the theme of the cafe. Other menu items include: colorful pastas, crazy shakes, and desserts. Every hour and a half the “Monster girls” do a live dance show and get guests involved too. It was super cute and the kids loved it. (SO DID I!) After watching the show, eating my fries, and closing out my bill I headed back out to continue my sneaker hunt.

I eventually made my way to Takeshita street in the heart of Harajuku. This is the most popular street in the area filled with street food, restaurants, vintage clothing stores, and souvenir shops. After reading several blogs, I found that crepes and gigantic rainbow cotton candy were must try things. I wasn’t in the mood for that much cotton candy on my own so I chose to try a crepe. I had an apple cinnamon crepe. It was only OK. I also decided to try peach coke from one of the 1 million vending machines found on the street. It reminded me of cherry coke a lot but was still pretty good. 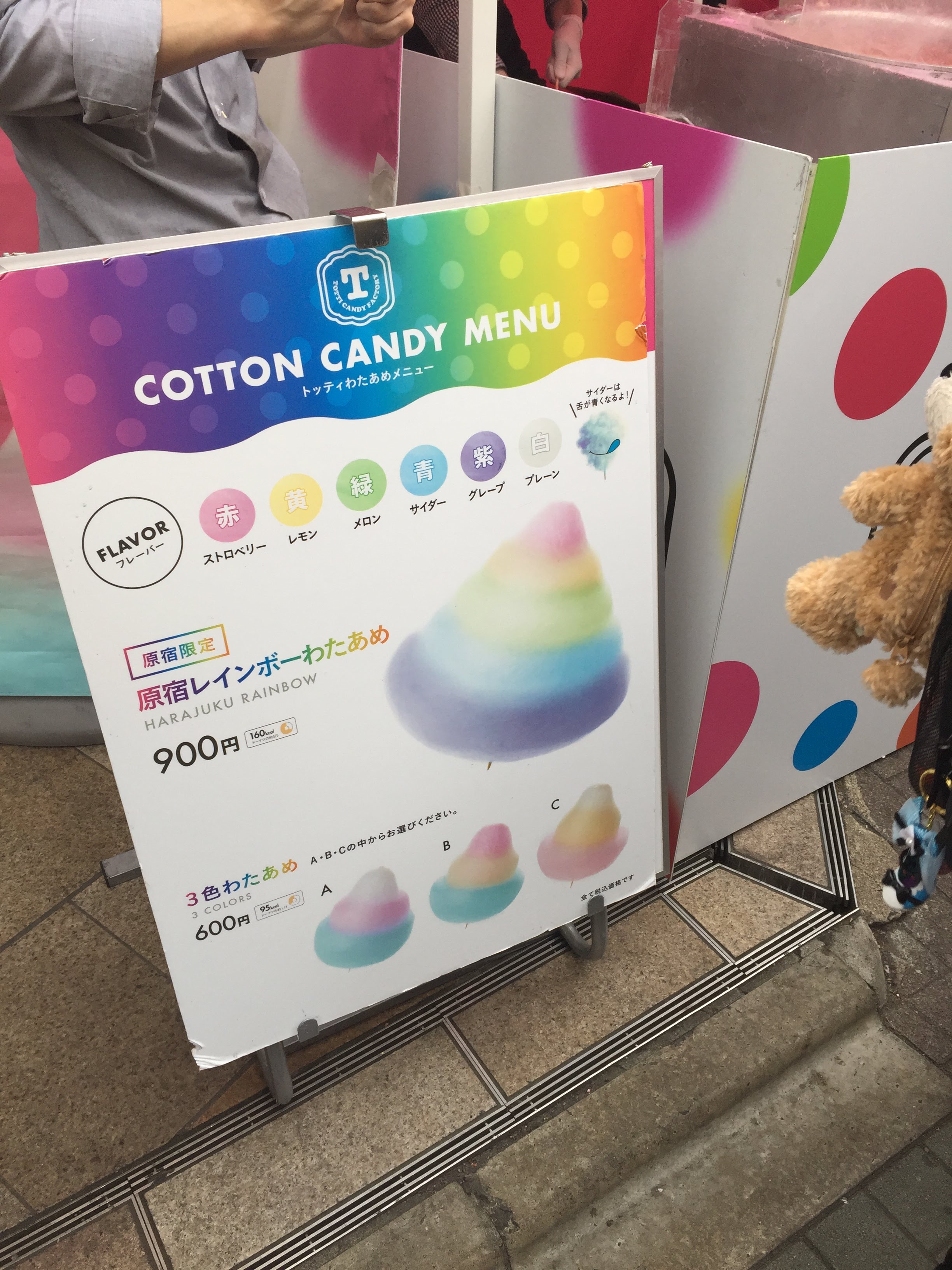 My last mission, outside of my sneakers, was to find as many of the crazy Kit Kat candy bar flavors. Tokyo has been known to produce unique flavors of the candy. I found a small assortment pack in a random souvenir shop. The pack had: strawberry cheesecake, apple, purple sweet potato, matcha green tea, matcha almond, strawberry, and a few other flavors. (I ended up also finding a melon flavor in the airport. I’ve tried a few so far and they are really good)

I finally made my sneaker decision after consulting some friends via text and went to make my purchase. (I did great!)

By this time the sun was setting and I was a little hungry since I had only had light meals all day. Another Tokyo bucket list item was to have ramen from Ichiran. This is a small ramen shop that always has a wait outisde. You first stop at the “vending machine” outside to place your basic order and pay. (cash only) You are then seated at a personal cubby where you are given a checklist on how you want your ramen to taste. Your ramen is then served through the small window at your cubby and the window flap closed once you receive it. You have a small water tap and cups at your cubby as well so you can truly eat in peace. The ramen was around $8. 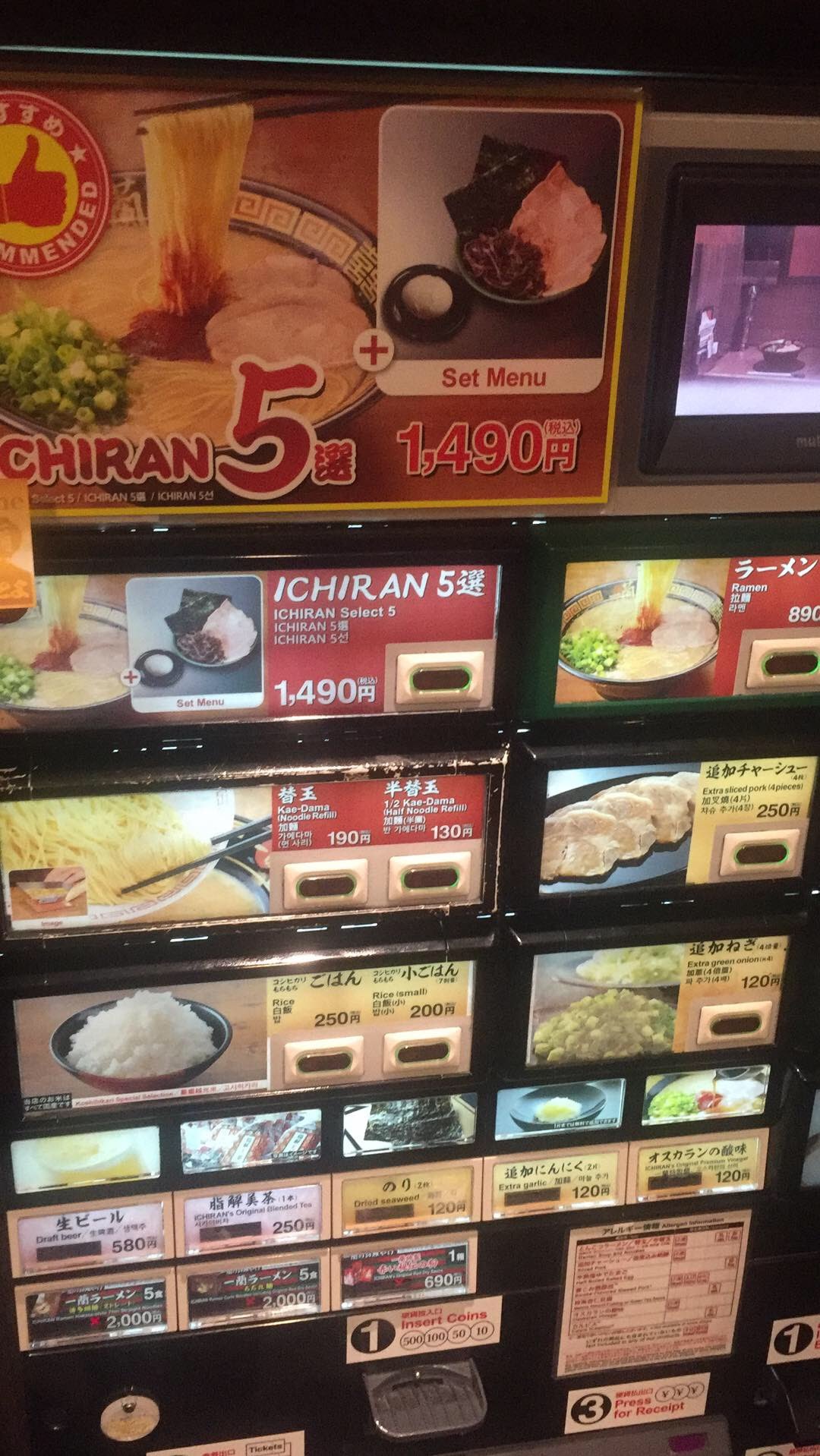 After enjoying my delicious ramen I started to make my way back toward Shibuya to check on my bags and rest my legs a bit. Although I was checked out, the hotel allowed me to relax in the lobby area. I charged my phone up a bit and decided I had one last must-do…SUSHI IN JAPAN!

I once again asked for a recommendation from the front desk. The initial place that was recommended had a crazy line and I was short on time. I decided to just walk around Shibuya some more to see it come alive at night. I was able to see a flash dance performance, street rappers, and even people racing in the human Mario Kart. I eventually came across another sushi place (Genki Sushi) that looked really fun. I only had one hour left to get in, eat, and get out. There was a short wait but I made it in just in time.

This place was SOOOOOO COOL. Once again you are seated at a personal stool in front of a small tablet. You order your food via the tablet and it is whisked directly to your seat on a conveyor belt that goes around the whole restaurant. You then notify the belt that you have your food by tablet, and the mini cart is sent back to the kitchen. You can order however you want but you have a 45 minute limit to ensure other guests can get in and eat too. The sushi was really fresh and pretty inexpensive too. I was happy to have stumbled upon that place.

After chowing down, I made my way back to the hotel one more time to grab my bags. My full day in Tokyo was coming to a close and I needed to catch the subway to the airport.

The station was only a 5-7 minutes walk from the hotel. ( I literally didn’t have to pay for transportation that day except to and from the airport. Once I arrived at Shibuya station, I had to ask several people to point me in the right direction for the airport train. There are so many different lines so it was kinda confusing. However, I made my way to the airport with time to spare!

How To Travel The World And Make Money Too
Cruising Solo: Is It Worth It?